The prototype for the Trezor wallet was created in 2012 by Marek Palatinus, Pavol Rusnak, and Alena Vranova. Palatinus and Rusnak met as co-workers at BRMLabs, a non-profit tech company in Prague, Czech Republic. They decided to work together to create a way to protect private keys in cryptocurrency wallets separate from an Internet-based service. Palatinus had been working on this idea independently up to that point. The pair was later joined by Alena Vranova, an experienced financial executive. In 2012, the three created their first prototype "cold" wallet. They founded SatoshiLabs, and began fundraising in 2013. The wallets gained popularity, and in 2016 SatoshiLabs unveiled the prototype for the Trezor One. In 2018, the company shipped their next product, the Trezor Model T.[3][4][5][6]

All Trezor devices are CE and RoHS certified, making them compliant with European environmental and toxic substance manufacturing regulations.[7][8] 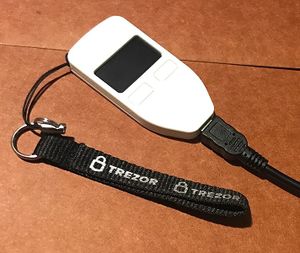 The Trezor One is the original cryptocurrency "cold" wallet. It is a small device, about the size of a car key fob, which maintains data necessary for storing and trading cryptocurrency. It includes a screen capable of displaying up to six lines of text, and two buttons on the front of the device, which are used to navigate its menu and enter text. Unlike "hot" wallets, it does not require an Internet connection to maintain its storage of cryptocurrencies. It can be connected to a personal computer via a USB cable, enabling certain digital tokens to be deposited and withdrawn to and from the cold wallet. The wallet is password-protected and requires the user to enter a PIN before withdrawing coins and sending them to another wallet. The Trezor One is compatible with Windows, Linux, Android and Mac OS. The Trezor One supports 500 cryptocurrencies including bitcoin, Ethereum (including ERC-20 tokens), Ethereum Classic, ZCash, Litecoin, Dash, Bitcoin Cash, Bitcoin Gold, NEM, and Namecoin. It does not support XRP or Stellar Lumens.[9][10][11]

The Trezor T has many of the same functions as the Trezor One, though it includes several upgrades and costs more. The Model T has an LCD touchscreen with a higher resolution than the Trezor One. It supports over 600 cryptocurrencies, though like the Trezor One it does not support XRP or Stellar Lumens. The Trezor T comes with a magnetic dock for affixing it to flat surfaces. It also has a port for MicroSD cards, giving it more robust and convenient storage options than the Trezor One.[12][13]

Although keeping cryptocurrencies in a cold wallet is widely considered to be the best way to protect and store them, even cold wallets like Trezor products are vulnerable to some security issues. In addition to certain kinds of sophisticated hacking attacks, the fact that they house private keys within isolated pieces of hardware make them vulnerable to being lost, broken, or stolen. Also, because cold wallets are password-protected, anyone with access to a user's password and PIN can access the wallet, making cold wallet holders potential targets for physical theft.[14] An example of this is a "$5 wrench" attack, which is a reference to a strip published by the webcomic XKCD, which is sometimes cited as a shorthand way of describing armed robberies involving the theft of cryptocurrency hardware (the "$5 wrench" attack illustrates why expensive hacking software is unnecessary to steal someone's cold wallet, as long as the thief or thieves are willing to resort to violence using household items, such as a common wrench).[15][16]

There have been reports of customers attempting to save money by buying Trezor products on eBay or Amazon, only to have their cryptocurrencies stolen by malicious software hidden in the device. Trezor announced that an unknown Chinese manufacturer had begun making and selling fake Trezor products with malicious software hidden in them. Trezor urged customers to be careful of bootleg Trezor products, saying over Twitter, “If you don't own your private keys, you don't own your coins.”[17][18]

According to a January 31, 2020 Kraken blog post, Kraken Security Labs identified a way to extract the encrypted seeds from both the Trezor One and the Model T. The technique depends on voltage glitching the physical devices. According to the report the vulnerability to such hacking can be circumvented by not providing access to the physical wallet devices and by enabling a "BIP39 Passphrase," which is stored independently of the devices.[19]