From CryptoMarketsWiki
(Redirected from Bitlicense)
Jump to: navigation, search

BitLicense is the common name for the license issued by New York State to cryptocurrency businesses. It was the first and, at least until mid-2019, only license or registration for cryptocurrency trading platforms and brokers in the U.S. The rules apply both to New York resident persons and entities and to persons and entities out of state that conduct cryptocurrency business with New York residents. On June 24, 2015 the New York State Department of Financial Services (NYDFS) published a set of rules called "Virtual Currencies," the application of which results in a so-called BitLicense that can be granted by the department.[1][2]

Claiming that “DFS, of its own initiative, and without the New York State Legislature’s mandate or instructions, adopted a regulatory scheme (commonly called the ‘BitLicense’) to quash the growth of cryptocurrency-based businesses in New York,” Theo Chino sued to abolish the Bitlicense. First filed in 2015, Chino's suit claims that the Bitlicense discriminates against bitcoin businesses such as his payments company, Chino Ltd. The case moved to the New York Court of Appeals in September 2019.[3] 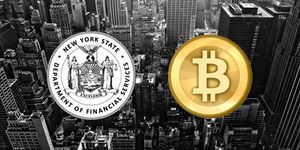 Any entity or individual who wants to conduct a cryptocurrency business in New York must apply to the Department of Financial Services and provide extensive information about the its own business and that of its affiliates, detailed biographical information about all key people along with an independent investigatory report, financial statements, banking details, copies of written policies and procedures. As of July 24, 2019 fourteen firms had been approved as BitLicensees: Circle, XRP II, Coinbase, Bitflyer, Paxos, Xapo, Square, Inc., BitPay, Coinsource, Robinhood, Moon Inc., LibertyX, Bitstamp, two subsidiaries of SeedCX, and Genesis Global Trading.[8][9][10][11][12][13][14]

As New York State-chartered trust companies, Gemini and itBit do not have BitLicenses. They have received specific authorizations from the Department of Financial Services to operate their cryptocurrency exchanges in accordance with their trust charters.[15] The Intercontinental Exchange's affiliate, Bakkt, received a trust company license which enables it to provide delivery services on the exchange's bitcoin futures contracts.[16]

In December 2019, the NYDFS released a press release in which it proposed two changes for companies seeking to list their digital assets in New York. According to the announcement, the proposed changes were designed to "enhance efficiency and enable VC licensees to offer and use new coins in a timely fashion." The first aspect of the proposal was the creation of a website run by the NYDFS that lists all coins permitted by the agency; the second part of was a framework for the creation of company coin-listing policies "that can be tailored to a VC licensee's specific business model and risk profile." The press release also said that the NYDFS would be seeking public feedback about the proposal.[17][18]

In June 2020, on the fifth anniversary of the creation of the BitLicense, the NYDFS announced that it would begin considering issuing conditional licenses that would allow startups to partner with companies that are already licensed. The NYDFS also signed a Memorandum of Understanding with the State University of New York (SUNY) that allows prospective licensees to experiment with new technology and use cases under the school's supervision.The NYDFS is seeking public comment on this move until August 10, 2020.[19][20]